Carthage, about 800 years BCE: Founded as a humble trading post by the Phoenicians, the city quickly grew to an important trade hub where precious goods from all across the ancient world arrived for market. 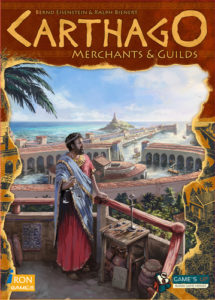 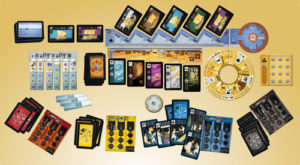 In Carthago: Merchants & Guilds, players represent merchants who attempt to increase their wealth and influence while improving their status within the merchant’s guild by loading wares, financing expeditions, and exerting influence in clever ways. This extraordinary card-driven tactical game demands that you make the right decisions at the right time!

A card driven tactical game for 2 – 4 players, age 12 and up from Bernd Eisenstein and Ralph Bienert. lllustrated by Christian Opperer and Odysseas Stamoglou. Duration 60 – 90 minutes.

The game components are language independent. German, English and French rules are included.

Carthago: Merchants & Guilds is a cooperation between Irongames and Game’s Up.

The promos/expansions are available at the shop!