Palmyra is a well known oasis city and as central place at the Silk Road, very important for the merchants. Also, the Romans knew this and conquered this territory onto a roman province. 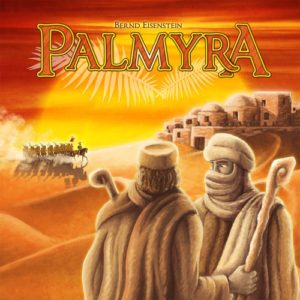 For Caesar, this isn’t enough, and so he wants to expand his sphere of influence. Under his orders, you are to send out your legions to annex new lands and your censors to collect taxes. The player who fulfills these orders the best will become the new governor of this province.

From time to time, when Caesar is especially impressed by your development, he may provide you with extra support. By placing new land tiles and moving your legion and censor, you earn new tiles and coins for the Roman Empire. The most important thing is to not be too greedy when collecting taxes, otherwise future income may become sparse.

You must be careful not to be cut off by tiles placed by your opponents, which will force you to lose valuable time. When all the 120 coins are collected, the game ends, and whoever collected the most wins.

In the solo-mode you try to get better within 5 levels with a better starting position you need to collect more and more coins! This means a long challenge.

If you own the white wooden „Caesar“-figure for the first 500 orders, this would replace the caeser-tile of the „expert-version“ in the game!