The Titans, demigods of the underworld, seek to spread evil and chaos in the home of the Greeks of antiquity. But humankind is not without its defenses, creating Titans of their own to withstand the attacks from the underworld. 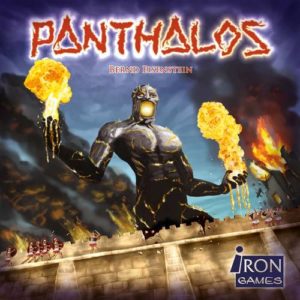 Meanwhile, life goes on in the ancient civilization; basic goods are acquired and refined into better trade goods, loaded onto passing merchant ships, and transported. Players in the game use their Workers and keep their action Discs ready for use. It is also helpful to have additional capacity available for reinforcing your troops and strengthening the power of your Titans.
Panthalos is played over 8 rounds, but can also end earlier if the power of the underworld grows too strong.


Panthalos is limited to 1000 copies.

… Epilogue: I assume that the cover will polarize, and some people will say for sure: this has nothing to do with the game. I don’t want to have the „thousandth-nice-building-cover“. The cover scene is one part of the game, and is, like a good cover have to be, proper dramatized!