The tile „Earthquake“ (only first edition!) has to show an Buildingtile on the lower left side (instead of an Landtile). 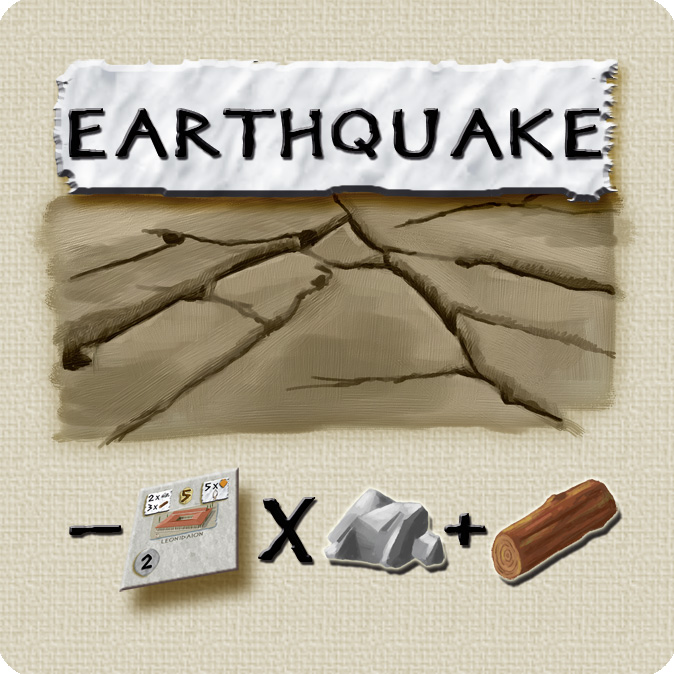 (rightclick onto graphics and „save as“)

5 b) „Bidding“ missing: All tiles with no bid will be removed and taken back in the box.

9. „End of Game“ correction: As soon as the last „C“-Tile is taken and placed (and income from all tiles is recorded) the end of the game is signalled.

If I am outbid for a tile, can I move my bid to a tile which has a higher minimum bid than the bid I made?
No – it’s only allowed to place a bid, if your bid is minimum as high as the minimum bid shown at the tile.

If I’m outbid for a tile, can I then shift my bid to a Conquest tile, assuming that my bid is enough to buy that tile with the +3 modifier?
Yes – you can move to every tile your bid is high enough.

If I take back my bid, how does that count when determining next turn’s player order?
You go after all the other players who made successful bids. If more players passes the same round, their running order won’t change to each of them.

Am I able to use luxury goods to substitute a payment of resources or coins to satisfy a Disaster?
Yes – Luxury goods are useful for every situation you need goods and don’t have enough.

If I get a Tile, that is not possible for me to place. Do I get the one-time income (inhabitants/cois) anyhow?
No – you’ll gain the one-time income only if you could place the new tile (that means a Landtile, which can’t be placed directly or a Buildingtile for which you con’t have a coin to place on).